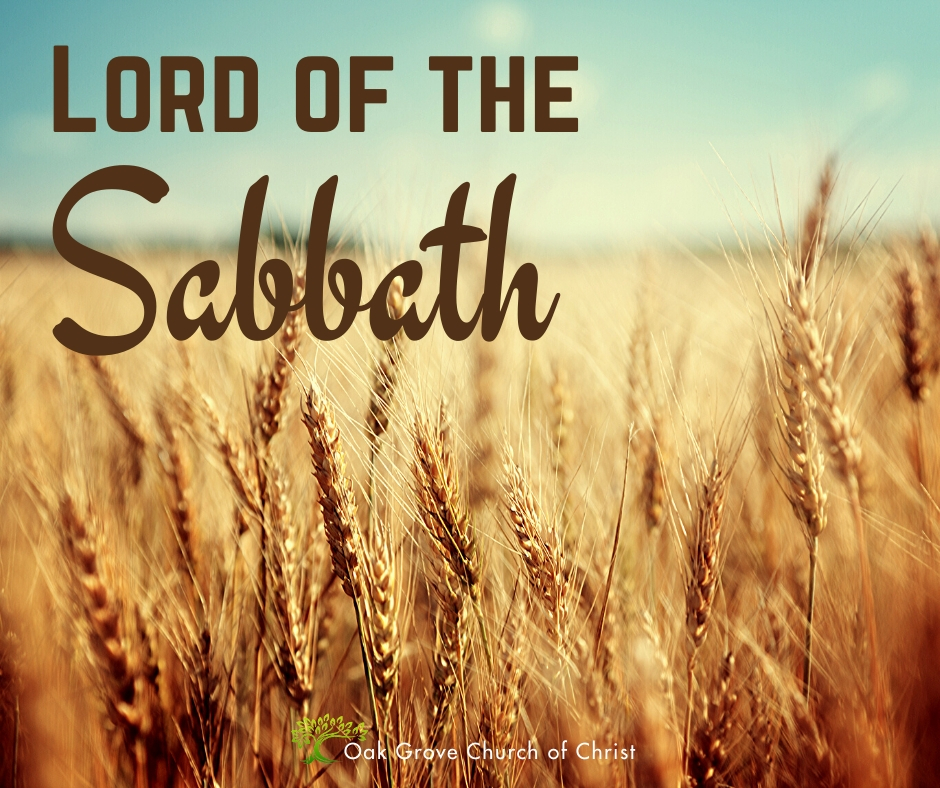 We read that Jesus is the Lord of the Sabbath. We read of a confrontation between Jesus and the Pharisees. They were frequently seeking to find some fault in Jesus and his disciples. They sought to do so, because they were seeking to put Him to death, for that was the penalty for breaking the Sabbath. Here they accused Jesus and His disciples regarding violating the Sabbath and work of the Harvest.

A Study of The Lord of the Sabbath Day

There is an Insufficiency

These were hungry men. Many of Jesus' disciples were poor, and had very little to eat. The law allowed for the poor to do this, to gather from the fields.

This law was a means by which the poor of the land would be provided for.

This was done on the Sabbath. The Law of Moses forbade this to do work on the Sabbath Day. The Pharisees were seeking a means for which to put Christ to death.

It was clearly contrary to the Law of Moses to work on the Sabbath Day. But, eating was permitted on the Sabbath. Were they working? Or, simply eating? There is the difference, and the law did not specifically address their situation. God made provision in the law for the poor.

They were eating, they were not working.

An Indictment is Made on the Sabbath Day

It was unlawful to harvest on the Sabbath. While the children of Israel wandered in the wilderness God provided the manna. But, on the Sabbath they weren't to gather, they were to gather double on the 6th day.

This did not cover the situation where they traveled on the Sabbath, or when the poor had nothing to eat.

They accused them of doing what was not permitted. How did the Pharisees know that God would not approve of this situation. But, they didn't know what God would approve of. They didn't truly know God.

They had a zeal for God, but didn't truly know God. We too, are to know God. The lesson to us is that we need to know who God is to apply his word appropriately to our lives and every situation we are in. We are to judge with righteous judgment, but can only know God's will, by knowing His word.

Jesus came to reveal God to us. Christ came to show us the love that God has. Therefore, this indictment they made against the disciples for eating on the Sabbath Day was unjust.

Three Implications of a False Indictment

Jesus addressed the situation, and set forth three implications to show God's will..

The Implication of Non-condemnation of David

God did not condemn David who ate the show bread, vs. 3-4. This show bread was holy, consecrated to God. It was only for the priests to eat. Yet, David ate this bread.

For anyone else to eat these things would be unlawful. David and his men are being pursued Saul. And, he goes to the tabernacle seeking refuge, and begging bread, and the only bread there was the hallowed bread which was to be reserved for the priests only. The Pharisees did not see David in condemnation, they revered him as the great king of Israel.

The implication here is that they were inconsistent and partial in their application of the law. They were only applying it in a certain situation.

The Implication of the Priests Working on the Sabbath

The priests themselves worked on the Sabbath and were not condemned, Vs. 5.

The priests and Levites worked on the Sabbath offering sacrifice.

They didn't know the meaning of mercy, not sacrifice, vs. 7.

The Pharisees were wrapped up in the letter of the law but missed the mercy of God within the law. They had forgotten that God takes care of the poor. And, that God is merciful to those who are in need.

They were in effect serious about keeping the law of tithing. The implication was that the Pharisees didn't have any mercy in their life. They were so busy focusing on the "Thou shall not..." they missed that the law was put into place for man's benefit. We learn that even when we are guilty of sin, God can have mercy and forgive us of our sin.

The Identity of the Lord of the Sabbath

One greater than the temple, vs.6-8. The Son of Man is Lord of the Sabbath.

Jesus sets forth His identity. He is greater than the temple. He is claiming His divinity.

If there was anyone who knew the meaning of the law of the Sabbath it was it's author. Jesus knew who what was and what wasn't permitted on the Sabbath because He was the one who wrote it. We know that the disciples had not done anything wrong because Jesus said they were guiltless, vs. 7. It was the Pharisees who did not know the law.

The Pharisees had so distorted God and His word that it had become a burden for man. When it was supposed to be a relief. He defended his disciples against this baseless accusation. We learn that God cares for His people.

The Creator of the universe, cares for you. He cares for each of us.

In this passage we find an insufficiency. Yet, we see God cares for the poor. We see an indictment, yet we see that knowing God and His word will not judge unrighteous. God can be merciful even when one has sinned. And we see the identity that Jesus is Lord of the Sabbath.

God cares so much for his poor and sinful creation that His love moved Him to act. He gave his greatest possession - His only begotten son. His mercy is open to all, whosoever believes on Him. To those who believe in Him he will pardon and withhold the wages of sin that they should not perish. To those who believe on Him not only will he hold back the wages of sin, but they will have eternal life.

Do you believe that Jesus is the Son of God? If so, show your belief by your works of obedience, James 3:18-20. We believe that Jesus is the Son of God. But we must act upon that belief. God put a plan in place. He sent his son to die. We must obey the commands of Jesus, John 14:15, 1 John 5:9. We must act on the belief, repent of our sins, confess Christ and be baptized to have our sins washed away. Then, live a life dedicated to Christ.

The Church of Christ