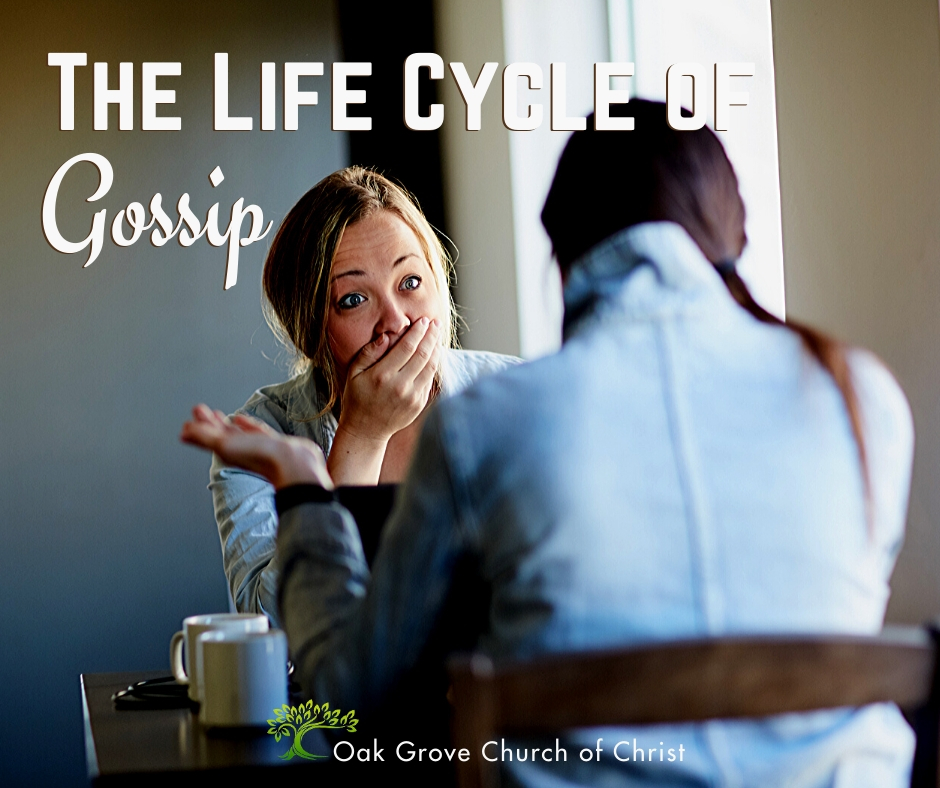 The tongue can be deadly. It has probably killed more peoples reputation than guns have killed people. Today, we will explore the life cycle of gossip.

The Beginning of Gossip

Concern about the spiritual welfare of the brethren is what is being dealt with in these passages.

When those who are publicly professing error it is right to mark them. Gossip is telling or listening to something uncomplimentary about another person with the intent of harm.

When Gossip is for Entertainment Purposes

This attitude of entertainment drives a whole industry of magazine publishers. It’s entertaining to tell the faults of those who are famous. It is gossip.

We must strive that when we speak about others it is not to make ourselves appear better than the other person.

We are gossiping when we tell things about others in order to build ourselves up.

When Gossip is Used To Seek Revenge

The one who gossips would rather get something on the other person in order to have revenge.

We are not to avenge ourselves. Vengeance belongs to God. Therefore, we should not use gossip to seek revenge.

It is Gossip when we Tell or Listen out of Spite

We don’t like someone, so we’d rather tell or listen to someone out of spite. We need to learn that our actions show our true intentions.

It’s gossip when we tell tales for spite.

It’s Gossip when Talking about Others Because of Idleness

The Middle of Gossip

Gossip never stays where it starts.

Gossip perpetuates lies that ought to have died. The majority of rumors are usually false. Anything repeated several times are often distorted. We should disallow hurtful rumors so that it will die.

It perpetuates lies, and assassinates character.

When we participate in ruining someone’s good name we take away their great riches.

Gossip not only ruins a person, but can also ruin an entire congregation. It may take a lifetime to build a reputation that is good. But, one rumor, one piece of gossip, can tear down that reputation.

Let’s be careful what we say and what we hear.

Gossip Shows a Lack of Love

Gossip reveals a lack of love. One can’t smear a brother, or sister, and love them at the same time.

Rumor, gossip ruins fellowship within a congregation and between congregations. We need to be careful and not give in to gossip or trade in gossip.

The End of Gossip

Where does gossip end? Gossip can only be stopped if we stop it.

We can stop it by exposing the gossiper.

We must call out those who are gossiping.

We Can end Gossip by Demanding Proof.

We ought to demand proof. The telling of an ugly story is like signing a check. If it fails, you are required to prove payment.

If all would quit hearing gossip, then it would stop. There is no reason to perpetuate gossip

Questions to Ask Yourself Before Speaking about Someone Else

A gossip will rejoice in iniquity rather than rejoicing in truth.

The Life Cycle of Gossip

It is gossip when...

How can we stop gossip?

All of these things are what we need to consider before we tell something about another person. We need to remember that our words are an index of our character.

We need to remember that the one who judges us, knows our character and what we are truly like.

He that speaks lies, and sows discord… is what a gossiper does. They speak things that they don't know to be true and sow discord.

So may God help us to use our tongues wisely. We need to examine ourselves. Are you guilty of gossip? Have you said or listened to things for the wrong reasons?

If you are guilty of the sin of gossip you should repent of that sin.

If you are not a child of God you are still guilty in your sin. Only by hearing and believing the word of God and confessing our belief and repenting of our sin and being baptized to have our sins washed away can we be made cleansed from our sins. Jesus took on our sins, the iniquity of us all so that we can be cleansed from our sin.

You can make your life right. You can repent from your sins, and be restored to a right relationship with God.

The Church of Christ